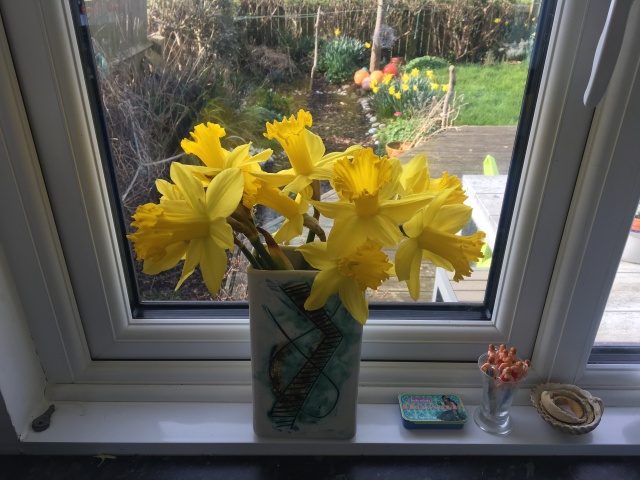 What a month, him indoors reckons that the only way to get through January and February is to have daffodils inside the house and as you can see we have them inside and out at the moment. The indoor ones came from the local fields at 69p a bunch and they have brought some welcome colour to the drab days, although for the last week we have had record breaking days of warm sun. I’ve also got a small group of snowdrops, I planted them quite a few years ago and thought they had decided not to appear, they were my grandmother’s favourite flower, she always used to see if she could find some to put in a vase for her birthday which was today, the 28th of February. Some years it would prove difficult and she would get violets instead and yet, the snowdrops this year have been blooming since the beginning of the month, or maybe earlier and the violets have only just appeared. I am still going through boxes since our move and found some of my grandmother’s handkerchiefs and a lavender bag that she must have made, at the very least, in the 1970s, the lavender was still going strong! 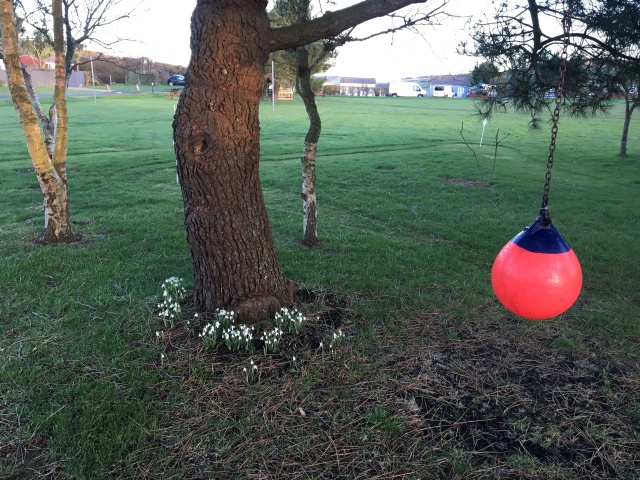 snowdrops growing in the field by us

I’ve had a couple of trips to Bodmin this month, a place I normally drive through to get to the north coast of Cornwall and it’s easy to bypass the centre. Driving in past four different supermarkets gives the impression of a large place to warrant so much choice, yet it feels like a small market town. Historically it’s had some fine moments and the buildings suggest a thriving past, including the old jail. One of these has just been turned into a new arts centre [I’ve mentioned this in passing before] by a company called intoBodmin and the old library, as it once was, will now host music, theatre, poetry and other community events. Normally when a venue is new it takes time to build up an audience where the community wait to see what kind of options you give them but it seems that the people of Bodmin are hungry for culture, when I went and performed one of my shows at the beginning of February we had a 94% capacity turn out. Incredibly exciting! 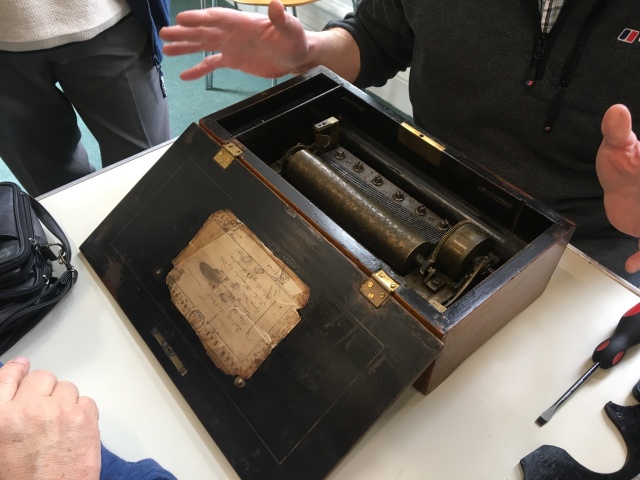 I returned a week later for a Repair Cafe, where people will look at whatever you bring in and try to make it work. There was a joiner to repair furniture; an electrician; a wireless geek and a wonder with a sewing machine who turned out to have been a wardrobe mistress in a theatre in her past life. As I had worked for the same company we had a great conversation.  An antique musical box [above] got its tune back, radios worked again and many people had their coat linings sewn up. I am definitely going back because it’s just lovely to see what things come in and, you can also learn something whilst you watch the repairs. 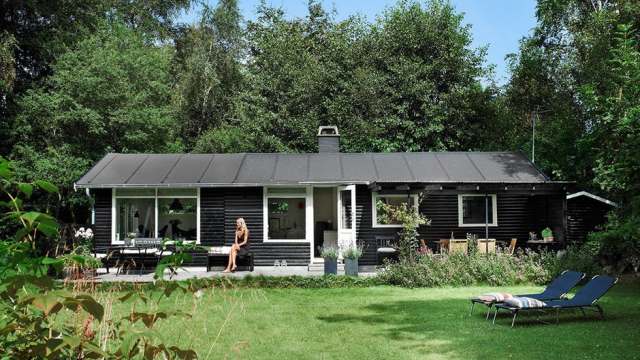 A Scandinavian black and white cabin, what’s not to like. The garden looks very private with plenty of places to hang out, to eat or lie in the sun [or shade].

I am an actor and theatre maker, I moved down to the SW of England 20 years ago with my partner and son. Nine years ago we bought a chalet on the Rame Peninsula and are fully embracing life of the cliff.
View all posts by Ruth →
This entry was posted in home, Travel and tagged cabin envy, intoBodmin, Repair Cafe. Bookmark the permalink.